Digital Puppeteering - it's Magical ! (Or MagicFriendsical?)

MagicFriends, the first App I was ever hired as a writer on, was launched this week on the App Store. This is exciting enough but really, the magic is in the game itself, and that's how I got hooked into the project in the first place.

Essentially, you get to talk to your child as a fantasy character, one that you control, one that you 'voice' and one that you can make dance or twirl or leap in the air. Effectively, you become a digital puppeteer and witness the magic occur!

Here's how it works. You connect two i-devices via wifi - you and your child could be in different rooms or even different countries. Your child rings Santa or Prancer, Sam the snowman or Candy the elf (Xmas edition) and when you answer, having morphed your voice in real time via the in-app voice-changer, your child sees and hears the character they called on their screen talking to them. By swiping and tapping, you can animate the character and she or he dances, twirls, winks, jumps, laughs etc on your child's device. 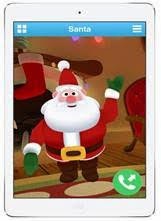 But the real magic is what happens when the conversation begins. Because you know your child, because this - for them - is real - anything can happen. Candy the  elf may be making the sort of toy your child dreams of getting. Prancer might have spotted a dog just like yours last year when he was on the roof. Santa might even guess what your child would really like while Sam might need your child to cheer him up with a terrible joke because he can't go into the grotto to watch the toys being made.

There are sample conversations and stories on the website  about life in the North Pole (Xmas edition), jokes and anecdotes about sharing a shed with eight other reindeer or working in a section of the toy factory or trying to wake Santa up in the morning. These are there to help you get started if you need them, but once the child starts engaging - and it's pretty instant; after all the world of imagination is just as real to them as the real world is - it just takes off and it is sooooo much fun, on both sides of the conversation.

At a technical end, it's using new technology developed in Maynooth, the engineering is done by Marino Software and the animation by Giant Animation...

If you want to see the video about how it all works, it's on the MagicFriends website . To download, the app is 4.99 per annum but Sam the Snowman is free if you want to try it out here - and new characters will be added through the year.There are a couple of Bunglalobs and a toothfairy called Penny in the wings.

Posted by Lindsay Jane Sedgwick - writer at 14:28 No comments:

Thanks to our brilliant, enthusiastic and inspiring speakers, CAN's first 'themed' event was a great evening. Charlene Putney on Twine, Chris Gregan (Snozbot) on their creation - the free games software engine, Fungus - and Dave McCabe on being a freelance Narrative Designer versus almost any other form of scriptwriter... The time flew in and several of us ended up sipping and talking on in the IFI afterwards.

Thanks to Filmbase for the room. Normally, CAN events are held in the Roasted Brown Cafe space on the floor below but we needed a screen to see some sample games -- yeah, it's a tough night when you have to watch games and learn interesting things from interesting people!

Unusually, we didn't have a lot of writers this time but we had everything else in the creative sphere of animation, vfx, games... If it felt a bit formal to be sitting in an 'official space' compared to gathering around tables downstairs, the ease of information flowing around the room and the candidness of the speakers made it a very special event. Not sure I got to talk to all the newcomers afterwards but hopefully they'll be back.

I'm thinking a themed night or two every year -- any ideas??
Posted by Lindsay Jane Sedgwick - writer at 15:37 No comments:

International Win for PUNKY in Moscow!!

International Win for PUNKY in Moscow!!

Congratulations to everyone who made it happen - behind the scenes, animating the scenes, voicing the scenes, directing them, storyboarding them, music-ifying them, writing them, creating the original concept art for them ... and especially to Gerard O'Rourke of Geronimo Productions (European Producer of the Year 2012) who utterly believed it was possible from the first time I brought my idea to him and Aimee who made it real.
Posted by Lindsay Jane Sedgwick - writer at 10:25 No comments:

CREATIVES IN ANIMATION NETWORK (CAN): Interactive Narrative Fiction & Games event: The next Creatives in Animation Network (CAN) event is on Wednesday November 19 th in Room 3, Filmbase. It’s on a Wednesday this time...
Posted by Lindsay Jane Sedgwick - writer at 11:28 No comments: