Yesterday, in the Abbey Theatre, on the main stage, history was made. 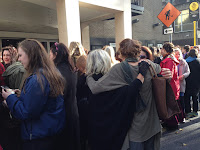 But it was also made on the street outside and in the lobby and it was made by such a large body of people with an excitement and energy I have rarely felt before.

It was infectious. It felt momentous. As if this energy and frustration and the need to make things better, to be heard, to be treated as equals had been buried for generations, under frustration and the reluctant acceptance that that was just the way it was. 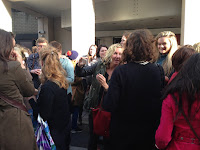 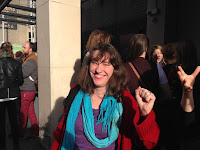 The speakers were profound and passionate, some spoke from a depth of experience of the gender bias - and yes, it is there and it's systemic; so many of the stories felt familiar to me; others belonged to the more recent wave of theatre practitioners and creatives.

I can't begin to sum up the content of the 32 speeches. About the frustration, the imbalance of power, the fundamental inequality throughout the arts. It's in the statistic and it's in the stories.

Theatre programming where "dead men take precedence over live women"....of being assertive and therefore labelled 'high maintenance/ diva/ ball breaker'. As designer, Zia Holly said, she was told that she could do anything that boys can do. Which was great. But now she was asking, "Why did I have to be told that? Boys don't get told they can do anything girls can do... I have inherently known that I had to prove myself".

Emma Jordan, Artistic Director, Prime Cut Theatre, was quoted as saying: "Maybe we had one eye open and one eye shut and we are all wide awake now!" 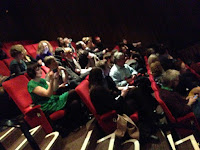 The gender bias is so insidious, it's often not intentional. It 'just is'. To paraphrase Ali White, actor and writer, it seeps into us by osmosis, makes us doubt ourselves. "This has to be the start of something better," she said. As Eleanor Methven, actor and founder of Charabanc Theatre Co. said, it could be The Oestrogen Rising!" 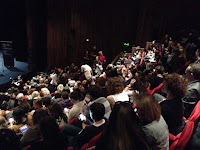 I was speaking recently in a debate in Trinity College, Dublin's Hist Society. "That this house should only consume art created by women." Yes, it was provocative and I was... it's the joy of debating! But when you look at the stats, when you hear the stories, when I looked at my own experience of writing and working in theatre, film, tv, animation, games, setting up a company, producing, directing,,,,  it wasn't hard to find my own stories of the pervasive, destructive and systemic gender bias. 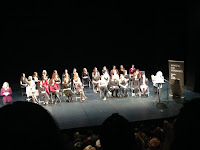 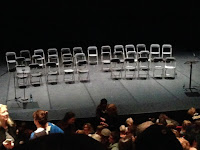 As Olwyn Foure said in a speech delivered by Aoife Duffin yesterday:" This is a great moment... and a shameful moment".

Because it has taken so long.

I wrote my first play back in 1983; writing for theatre is where my heart resides in so many ways which is why I've produced and directed recently in order to get my plays out there and will do so again. But the fantastic and wonderful and amazing thing about yesterday is that now the game changes. It feels today as if the ground fundamentally shifted yesterday and that felt fantastic and exciting.

Posted by Lindsay Jane Sedgwick - writer at 09:28 No comments: