With rehearsals well underway in the theatre and Galway Uni, I can honestly say it's FANTASTIC to get the show up again and Karen still blows me away in the part... I can't wait for opening night on June 14th.

Posted by Lindsay Jane Sedgwick - writer at 10:32 No comments:

Scenes From... a new script, a new world coming to life!

This is where it began - the first little chaos of pages, filled with notes, scribblings, snatches of dialogue, character, theme and mad little scratchings that might yield something of which I didn't yet understand the value. 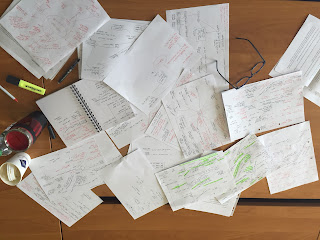 Screenwriting.
Any form of creative writing.
It's a mad business altogether.

You can't lay down rules beyond deadlines or aspirational goals - as in, "I want this to be the most amazing script EVER" or "I want this sequence of scenes to blow the reader and then the viewer out of the water with emotions they haven't felt in years!"

Yep. Might as well be ambitious. It's why we write. To move people. To make them moved. If it's a film, we want to send them out of the cinema talking about the characters and the world we created.

Especially when you've been commissioned to write that film because that really is the ultimate gift as a writer - to be trusted with someone's idea, to make it magical, to make it breathe....

Scenes From a Memory is just that. Commissioned by the director, Nicolas Courdouan; a wonderful and original idea that wanted to be a feature film.

And here's the even better news: I delivered the first draft a few weeks ago and he loved it. So now I am in the middle of the joyful task of tweaking, layering a little and improving it in draft 2.

But if you want a taste of what this very talented director can do, have a look at the page for the short film he has just shot, Radha


Posted by Lindsay Jane Sedgwick - writer at 12:31 No comments: