It starts on Weds, Jan 20th and runs for eight weeks for two hours each night. As I say in the blurb, it's suitable for anyone with a wicked and visual imagination who loves creating characters and putting them in jeopardy!

You can find more information here: https://bit.ly/2BTRwVt
Posted by Lindsay Jane Sedgwick - writer at 14:59 No comments:


Last Friday, Nov 30th, I spoke to a packed King's Hall in central London during the Kinds Content Futures conference run by C21Media, about the experience of creating my series, PUNKY. About why I had created it, about my goals for the series and about the impact it has had worldwide on individuals and, hopefully, on society as a whole.

I said we were a small production, (Gernomino Productions made both series) with strong support from a small broadcaster (RTE). Not only does the central character have special needs (Down's syndrome) but we dealt with split parenting, bullying and many other issues that children of her age (she's six) deal with on a daily basis. It was a mainstream series that fits anywhere in the programme and that was the goal - that we would help children to learn (or maintain) acceptance of difference; celebration of how much more interesting it makes life. 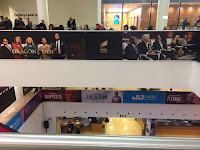 My fellow panellists all worked for large broadcasters with the clout and the finance to do better that we did. The trick was not to let ideas get watered down - as they often tend to be when they go through many layers of bureaucracy and decision-making; as they often are when broadcasters or producers flinch at the idea of offending their 'selective' audience.

All they had to be clear about was to create characters that were unique and compelling that happened to have special needs, neuro-diverse challenges, physical or mental health-based challenges but that these 'issues' should not be the reason they are in the series. Story is king and story relies on compelling characters; use the 'issues' to tick boxes and get funding but don't make them the reason for the show. No more than they are the 'reason' any individual is interesting in real life. Yes they will affect storylines but organically, naturally, as part of daily life. 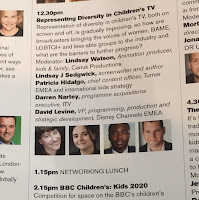 The other speakers spoke then about their individual broadcasters' attempts to add diversity to kid's television content. From Patricia Hidalgo, Chief Content Officer, Turner EMEA and International Kids Strategy, we had Stephen Universe and other series that do actually - albeit in animated form - try to push the gender and ethnic barriers. From ITV's Darren Nartey, Programme Acquisitions Exec ITV, we had what felt like a very genuine intent to be more inclusive along gender and ethnic lines.

From Disney's David Levine, VP Programming, production and strategic development, Disney Channels EMEA, we had the party line about how well they were doing and had done to include diverse ethnic and gender characters - Doc McStuffin had a scene with gay parents etc. He ended his speech talking about how there was a character with two mums in the next High School Musical (and that they were super excited about that) and that the grandmother in a new live action series was a big character.

Is it me or should that not necessarily be news now?

What was very clear was that while ethnic and gender diversity are being included a little more within stories, it's still in a small enough scope to legitimise the need for these panels. As for any of these large players including characters that happen to have special needs, are neuro-diverse or differently able-d, there was nothing I heard to suggest anyone was leaning in that direction.

As I mentioned in my speech talking about selling Punky, there's a resistance. As one major broadcaster once notably said when Punky was pitched to him, his broadcaster doesn't "'do' sickness".
How revealing is that about how broadcasters feel about a huge segment of our community?
Posted by Lindsay Jane Sedgwick - writer at 10:45 No comments:

From idea to script idea... how can you tell?

I did a two-part article on how to work out if the exciting idea nuzzling your ear lobe is one that will work as a screenplay for writing.ie recently - the second part out just this week.

You can find both of them here.
Posted by Lindsay Jane Sedgwick - writer at 16:09 No comments: