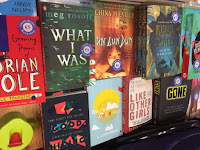 So, sorry, but I'm sharing it cos I love this book and it has been a long time in the making:

"Jessie Keane just wants her family to be normal… utterly, completely normal. Having moved from L.A. back to Ireland, normality would offer a chance to avoid the ‘looks’, the rumours and the bullying that she has dealt with in the past. But ‘normal’ is hardly possible. Not with a little sister who claims to have been abducted by the Virgin Mary (twice), a wildly contemporary artist stepmother and a creative architect father with a penchant for cross-dressing. As she tries to balance this eccentric, yet loving family, and what she hopes will be an ordinary school life, Jessie is put to the test when a new development shakes the façade she is working so hard to craft. She must stop this! Or so she thinks…
When I picked up Dad’s Red Dress, I expected a book that was quirky, entertaining and funny. What I did not expect was a novel that spoke to the heart of what it means to grow up. Filled with vivid, genuine characters and complex, conflicting family drama, it is joyous, loving and truly unique among the vast canon of coming-of-age stories. Each character is intricately drawn. Difficult subject matter is handled with great sensitivity. The dialogue is realistic and relatable for any young person. And while the situation may be unusual, the emotional impact is not. It gives the reader much to consider about life, friendship, who we really are and what makes a family. Dad’s Red Dress is indeed humourous; a delight to read. Simply wonderful." 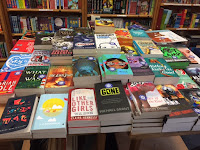 Review by Mary Esther Judy in Inís Mag for CBI.

Dad's Red Dress is available from Amazon, Charlie's Bookshop in Galway, Maynooth Bookshop, Co. Kildare and via Paypal by contacting ljsedgwick66@gmail.com.
Posted by Lindsay Jane Sedgwick - writer at 22:11 No comments:

Are you interested in reading a new novel pre-publication and giving your thoughts on it?

I am looking for four beta readers for my new book. This means you're the first people to give it a reader's assessment and I can get a sense of anything that is or isn't working before I sign off and send it to print.

Provisionally called The Matchmaker, the book is about Angelica, a 14 year-old who lives with Mum (Molly) in an old hotel on a peninsula in Donegal. Deciding it's her fault that her mum is single, Angelica reasons that she can't rightly have a boyfriend herself until she fixes Molly up. So she sets up a dating website to matchmake her mum. All goes well, for everyone else in the town, except for Molly. A comedy of errors, coming of age story.

What I would be hoping to get is your thoughts on the book. In return, I can give you a reference for your CV if that's of use, a signed copy when the book comes out and my  lifelong and earnest appreciation.

Here's the opening, so you can see if it would interest you to read:

My name is Angelica Moone. I’m neither a vampire with gold eyes and the need to drain cute boy-bands of blood nor a werewolf. You could say my father was a whale but even that’s pushing it a bit. I live with my mum, Molly, in a private flat above the lobby of a hotel called The Drisogue Arms. It stares out over a rugged peninsula that elbows into the Atlantic on the most westerly coast of Donegal. This is the most westerly part of the west of Ireland, which is pretty far west, Europe-wise.

This makes for a lot of wind, rain and storms. We found an empty coffin once and a beach full of mannequin arms, all left handed… I’m sure there have been drugs washed up too and maybe a body or two but nobody will admit it.

Pointless to say I’m fourteen. People who say I’m too young smile when I say this, as if my response proves to them that they are completely right. But then they don’t know me. It’s not their fault.

I’ve been way ahead of them since the day I was born.