Thrilled to announce that PUNKY is now available on Hopster, the most downloaded TV App for Children - and one that is ad-free, which has to be a bonus coming up to Christmas! That means you can get the series on your Apple TV box too, which is handy. 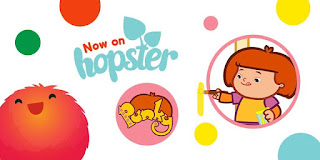 Last year, PUNKY was taken up by Sweden and Brazil, the latest country this year was Portugal. It's a really nice feeling to know that it is now all over the world, from South Korea to New Zealand, from Turkey to Denmark.

You can check it out on Hopster here.

Thixs is how they have introduced it to their audience on the Hopster Facebook page: "New show alert.

😊 Punky is a beautiful show about a little girl with Down Syndrome. We love it because it teaches kids the value of family and that it's great that everyone's different. Watch Punky now: https://bnc.lt/HHJd/GUh39qtlou